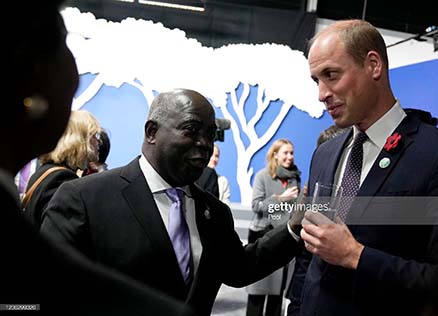 PM Mottley tweeted this pic. of her and US President Biden holding hands on Nov. 2, 2021 as they walked out of the US-EU Build Back Better World Forum.

Photos emerging from the conference showed Prime Minister of Barbados, Mia Mottley laughing with Prince Charles ahead of their bilateral meeting on November 1st as well as holding hands with US President Biden as they walked out of the US-EU Build Back Better World Forum held on the margins of #COP26 moments ago. She was also seen greeting UK Prime Minister Boris Johnson by rubbing elbows as they arrived for day two of COP26 at SECC on November 1st.

While The Bahamas’ new Prime Minister Philip Edward Davis, was seen laughing with the Duke of Cambridge, Prince William, during a meeting with Earthshot prize winners and heads of state on day three of COP26 at SECC on November 2nd.

Prince William, Duke of Cambridge speaks with Bahamas’ Prime Minister Philip Edward Davis during a meeting with Earthshot prize winners and heads of state on day three of COP26 at SECC on November 2, 2021 in Glasgow, United Kingdom.(Photo by Alastair Grant – Pool / Getty Images)

Caribbean leaders are steadfast in the position that if the global average air temperature rises above 1.5 degree Celsius it will have consequences for their local economies.

“Those who need to make the decisions are kicking the can down the road and they believe that they can because they are not seeing us- they see themselves,” Mottley told Christian Amanpour in an interview. “A lot of us that are going to be affected before Shanghai and Miami”

Among the actions being advocated for are the reduction in gas emissions from burning fossil fuels like oil, speeding up a transition to the use of more renewable sources of energy (such as solar and hydro energy) and adequate financing to help small, developing countries to become more resilient to climate change.

They support the idea that to reach a 1.5-degree pathway, new cultivation approaches would need to prevail, leading to a 53 percent reduction in the intensity of methane emissions from rice cultivation by 2050. Finally, about one-third of global food output is currently lost in production or wasted in consumption.

U.N. experts say that even if current national plans are fully implemented, the world is headed for global warming of 2.7C, with catastrophic consequences. The United Nations said last week greenhouse gas concentrations hit a record in 2020 and the world was “way off track” in capping rising temperatures.