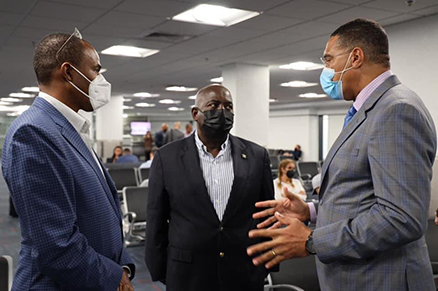 1: Antigua and Barbuda Prime Minister Gaston Browne, chairman of the Alliance of Small Island States (AOSIS) and of CARICOM, the Caribbean Community.

Also in attendance are:

7:Premier and Minister for Sustainability and Climate Resiliency of the Cayman Islands, Wayne Panton.

The formal opening plenary of the twenty-sixth session of the Conference of the Parties, COP-26, also referred to as the United Nations Climate Change Conference 2021 in Glasgow, the United Kingdom of Great Britain and Northern Ireland, kicked off on Sunday at the Scottish Event Campus.

A central issue is the provision of support to developing countries, especially in relation to the goal of mobilizing $100 billion annually by 2020. Financial support is crucial for all elements of the climate change regime, including mitigation, but also in terms of adaptation, capacity-building, technology transfer and several other elements. Many Parties, especially developing countries, feel that in order to advance towards full implementation of the Paris Agreement, previous commitments should first be honored.

On Sunday, #G20 leaders met and agreed action this decade towards keeping 1.5 in reach. They include an end to funding coal projects overseas and scaling up support for clean power.

COP26 is slated to run through November 12th.

“As Caribbean countries with similar challenges, COP26 presents a unique opportunity to address these challenges and craft strategies towards advancing the climate agenda,” Jamaica PM Holness said in a tweet.

The Caribbean leaders first engagement will be today, Monday, November 1, participating in the Opening Ceremony of the World Leaders Summit.

U.N. experts say that even if current national plans are fully implemented, the world is headed for global warming of 2.7C, with catastrophic consequences. The United Nations said last week greenhouse gas concentrations hit a record in 2020 and the world was “way off track” in capping rising temperatures.